Comments Off on The Little Black Dress 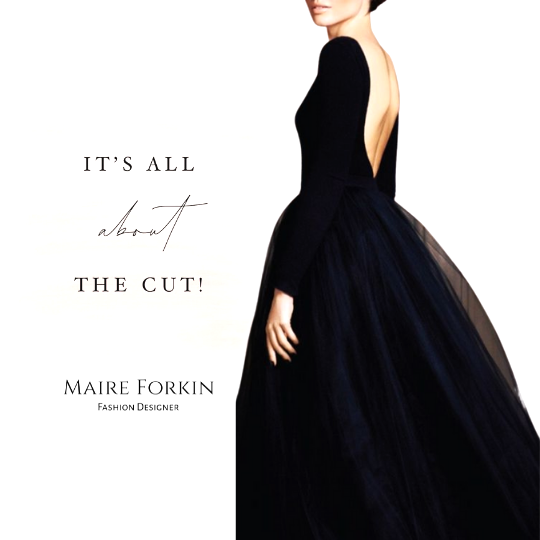 Fashion’s best friend is the little black dress. It’s as classic as a clothing garment gets, and such a general concept that it can be applied time and again to fresh designs. A little black dress can be any style, any fit, any shape. The sole purpose of it is to highlight a woman’s singular beauty without detracting attention from her natural features. 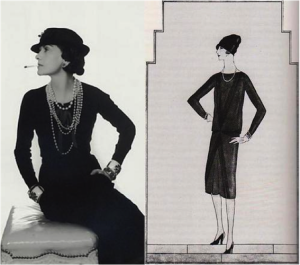 Coco Chanel is credited with inventing the concept as we know it today, but black dresses predate the iconic French designer by decades. Previously, black dresses were associated with death, poverty, and a lack of decadence (particularly in the Victorian era). Widows would wear black after the death of their husbands. Sometimes ladies in mourning would wear black for many years after losing a loved one. Servant women would wear black because it didn’t dirty as obviously as other colours, and plain black fabrics were not as luxurious as patterned and vibrantly dyed materials. Black had a utilitarian connotation far before Coco Chanel had the wisdom to make it seem glamorous.

Gabrielle ‘Coco’ Chanel earned her place in fashion by breaking the rules. Her first Chanel Boutique opened in Paris in 1918. She immediately began setting trends by not conforming to the times. The Roaring Twenties welcomed her innovative ideas gladly—she was one of the first to design trousers and suits for everyday womenswear. It took practically no time for her to gain influence in the fashion world. In October of 1926, American Vogue published an issue with Chanel’s iconic little black dress on the cover; this was a first of its kind.

While the design itself was not particularly new, the colour was shocking. Chanel’s rival designer, Paul Poiret, criticised her new look by referring to it as “deluxe poverty”. But Chanel was smart because her design was truly sophisticated while also being affordable. Because France was experiencing the impact of WWI like the rest of the world, simple and accessible fashions were bound to come into trend. The public deemed that 1926 dress design as “the Ford dress” because it shared features with the Ford automobile: it was widely accessible, simple, clean, and—most importantly—it was black.

When the little black dress came back into trend

While the ‘little black dress’ concept never completely left the fashion vernacular, it had its peak moments and moments of resurgence. During the wartime era, its practicality was invaluable, but it lost popularity during the American economic boom of the 50s. Come the 1980s, a practical black dress was almost unheard of. Flashy colours, sporty styles, and exaggerated shapes defined this decade. This, of course, led into the relatively clean and elegant fashions of the 90s, where the little black dress flourished once again. 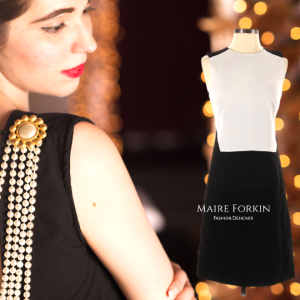 Coincidentally, the 2020s have seen a resurgence of those same 1990s styles among young people. Simple, streamlined designs are as sought after currently as they were when Coco Chanel first began to share her vision with the world a century ago. All signs point to modern women valuing the versatility of a staple black dress.

How Maire Forkin does the little black dress

Just because designer dresses are investment pieces does not mean that they must be for a specific occasion. At Maire Forkin Designs, there is no prerequisite requirement for a lady to order a dress. The little black dress is a garment so essential that it makes complete sense to invest in having one tailor-made for you.

Maire has a range of designs that can all be adapted. Your perfect little black dress may not be the same as another woman’s, and Maire understands that different styles suit different people. As a client of Maire’s, it is her mission to find the look that will flatter your body most.

Visit Maire at her studio at 30 Molesworth Street, Dublin 2. You can view our exclusive collection of designer dresses and coats. For more information on our Contemporary Collection or to Book A Consultation. For further information speak with Maire on 086 1721563 or Contact Us.